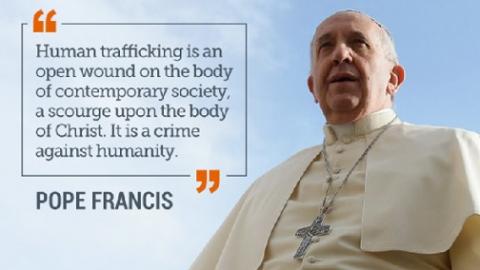 A recent article from the Association of Catholic Colleges and Universities (ACCU) features the work that USF has been doing in this area through the AGO-Rome, USF4Freedom and Not for Sale.

"Another unique example of anti-human trafficking efforts at Catholic colleges is found at the University of San Francisco (USF) within the School of Management. Professor Marco Tavanti, Ph.D., director of the Master of Nonprofit Administration (MNA) program, president and co-founder of the World Engagement Institute (WEI), and director of the Academic Global Immersion (AGI) program, spearheaded the May 2015 USF for Freedom Symposium (USF4Freedom) with colleague Dr. David Batstone, who founded the Not for Sale campaign. Tavanti says USF4Freedom was organized by the students who participated in the AGI-Rome program, an immersion trip for MNA students “in collaboration with Jesuit Refugee Services on international practices and global policy challenges facing refugee service management, forced migrations, and human trafficking,” the program’s website states. The Symposium consisted of a day of lectures given by leaders in various Bay Area nonprofits that serve human trafficking and modern slavery victims, such as Jesuit Refugee Services, Not for Sale, and others that seek to “accompany and advocate for the underrepresented.”

Tavanti emphasizes that USF4Freedom, AGI-Rome, and the partnership with the WEI seek to inspire and equip students to act. He says USF4Freedom and AGI-Rome inspired the development of a Professional Graduate Certificate in Humanitarian Emergency Management “as a way to build capacity in building careers in this field.” He also notes the influence of USF’s Jesuit animation on USF4Freedom: “It sprang from the importance of addressing the Jesuit values of ‘accompaniment’ along with advocacy and service, to inspire our reflections and preparations.” Pope Francis also played a large role: Having met with the Holy Father in January 2016 during the second AGI-Rome, Tavanti and his students “have been further inspired by Pope [Francis’s] call for social justice and human dignity.”