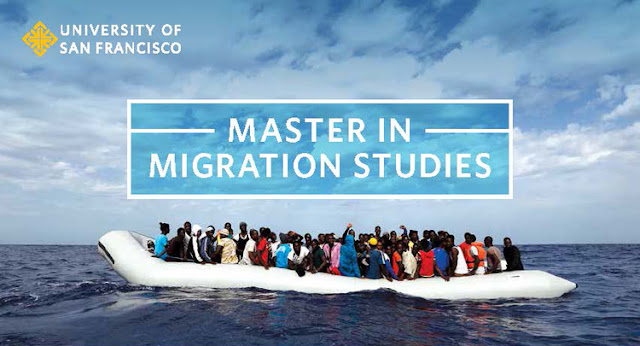 The University of San Francisco (USF) has recently launched a Master Degree Program on Migration Studies. As we are faced my growing crises of forced migrations in Europe and worldwide, programs like this are becoming even more relevant for developing appropriate and competent leaders for the present and future global needs. International migration, along refugee crises, and human trafficking are some of the most pressing global challenges, international responsibilities and societal opportunities.

The Master in Migration Studies at University of San Francisco (USF) has been created in collaboration with the Universidad Iberoamericana, the Jesuit university in Mexico City (UIA). USF’s Master in Migration Studies combines its interdisciplinary approach with field experiences with migrants and with a particular attention to Mexican and Central American migration. In an article to the Association of Jesuit Colleges and Universities (AJCU), Dr. Lois Ann Lorentzen, USF Professor of Theology and Religious Studies, highlights the Latin American and Jesuit values of the program: "Mexicans make up roughly half of all unauthorized migrants to the U.S. In addition, half a million Central Americans cross Mexico annually, many of them making the dangerous journey north on top of a train known as “la Bestia.” The new USF program will benefit from Jesuit programs in support of migrants in Mexico, Central America, the U.S. and other parts of the world. For example, the Jesuit Service for Migrants in Mexico was founded in 2002 to address the urgent needs of migrants within Mexico, and several Jesuit groups staff comedores (food distribution centers) and shelters along the migrant route as well as the country's northern and southern borders."

Dr. Marco Tavanti has been instrumental to develop other programs similar to this and the AGI-Rome that aim at preparing adequate leaders and managers to address the challenges and opportunities of people on the move. He was instrumental for the creation of a Master degree program at DePaul University in Chicago focused on Refugee and Forced Migration Studies. He also developed the Intercultural Refugee Service Management Program in Jordan, in collaboration with UNHCR, UNRWA, IOM and other agencies with the purpose of helping nonprofit voluntary agency refugee resettlement workers (VOLAGs) to understand the global struggles and international procedures linked in migration. The Refugee Studies Centre at University of Oxford has been a pioneer in the study of forced migration and has been offering substantially contributing to the field. The educational challenges of such innovative program is to combine the understanding of international legal environments, with cultural normative and other interdisciplinary aspects with managerial skills for developing, running and assessing projects, programs and organizations.


The USF- School of Management AGI-Rome program along the USF Master in Migration Studies aim at preparing professionals to meet the needs of migrants and refugees. They aim to prepare professionals to adequately and competitively address these global challenges. They aim at understanding the intersection and complexity of forced migration with refugee and human rights responsibility, and with criminal activities linked to modern forms of human trafficking. They exemplify what former Jesuit Superior General Rev. Pedro Arrupe, S.J. envisioned in these professionals who can change the world by becoming “women and men for others."