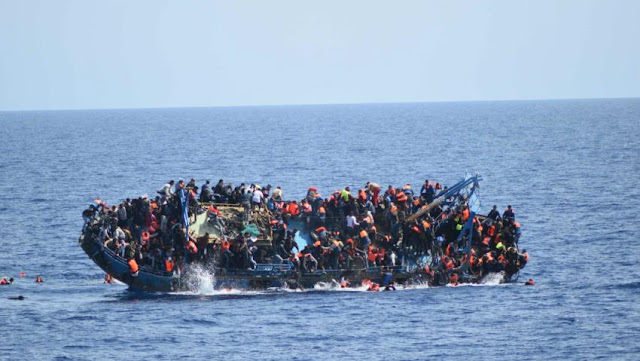 Source: The New Arab: More than 250 refugees 'rescued in Mediterranean' off the coast of Libya.
In 2017 alone, over 3,000 migrants have died while making the journey to Europe [Getty].
Date of publication: 27 December, 2017


Drowning or Diaspora: Where do we go from here?
By Linda Ereikat, MIMS student

In the waking hours of September 2nd, 2015, images of three-year-old toddler Aylan Kurdi’s lifeless body on a beach at the Bordum port in Turkey sparked international debate and outrage. The disturbing photograph of the Syrian child was a mere representation of the reality: that refugee lives are simply not valued. Aylan, along with thousands of other migrants, lost their lives during their journey to refuge and safety in the harsh waters of the Mediterranean Sea. According to the IOM, 5,143 migrants crossing the Mediterranean were either dead or missing in 2016 alone (IOM, December 2017). Deconstructing the cause of Aylan and the thousands of other migrants who have lost their lives at sea can be discussed in several different components and compartments of migration studies. Some may choose to discuss the rubber boats and tampered life vests provided by the smugglers, others will blame the parents. However, the utmost important factor in understanding these tragic migrant deaths is simply the notion that people are being forced to choose between the risk of drowning in order to reach the diaspora.

The migrant deaths in the Mediterranean Sea are compartmental to the discussion on immigration and human rights. The migrants who do make it across the sea and survive their traumatic journeys of crossing borders and leaving their lives behind, have to endure a new struggle as they start from scratch to build a new life. To learn an entirely new tongue, struggle through the maze of a nation’s immigration process, and beginning your life in exile are the immigrant realities that we are not discussing enough. The media and global narrative on immigration often focus heavily on the journey, and not the arrival of those who survived the journey. The destination was not the end.

There are several efforts in providing humanitarian assistance to migrants upon arrival. These NGOs play a crucial role in serving the people and assisting with their transitions and integration. Service work is a form of activism because it deals with the people directly affected by the issues and policies that we are fighting against. But an issue in the immigrant narrative has always been the feeling of not belonging and struggling in the diaspora. The struggles of becoming a migrant are endless including the traumatic journey and increase of anti-immigrant sentiment. It creates a view that the choice is either drowning in the sea or existing in the diaspora. This is why the work of service along with empowerment and uplifting our communities is crucial in our plight to achieving real immigrant justice. We must envision a world where the word “immigrant” mirrors the word “dignity”. We must envision a world where migrants don’t have to feel like they are drowning in the sea even if they did not physically drown during the journey. To empower, uplift, and truly act as a community committed to each other is necessary for the longlasting prosperity of immigrants.
By Linda Ereikat