The EU and Ethics of Migration 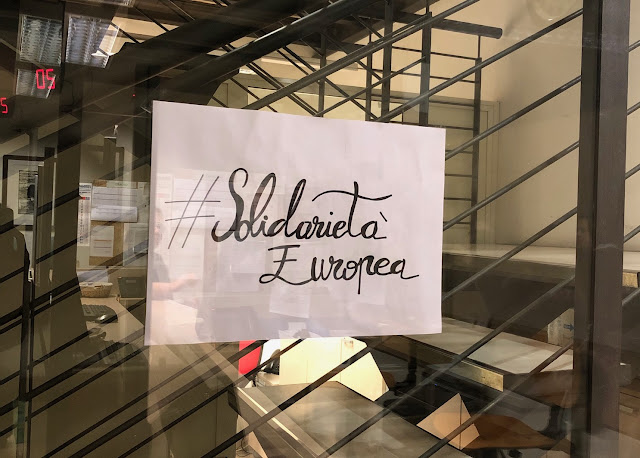 Out of Sight, Out of Mind:
The E.U.’s unethical approach to migration management
Karen Larke, MA Migration Studies 2019

In the spring of 2013 I had the chance to go to Rome during my undergraduate studies. Six years later, I found myself back in Rome participating in an immersion focused on refugee services. In 2013, things were quite different in Italy and the European Union. Migration via the Mediterranean Sea was still a newer phenomenon. The EU and Italy were scrambling to find a solution to an unprecedented flow of migrants toward Europe.

What I thought knew

Six years later, as a current Master in Migration Studies candidate, I thought I was pretty well informed on the refugee situation in Italy. I knew that there were fewer migrants and asylum seekers arriving by boat because of efforts to detain migrants before entering Europe, that the E.U. made such deals to stymie migrant’s mobility. I also knew about the human rights abuses Libya, the right-wing and anti-immigrant political waves of Italy and Europe, and the connection to Brexit. Despite all this, there was much I didn’t know, that which the BBC and the New York Times could not fully explain. This is what I encountered during my second time in Rome.

The reality in the E.U., and in Italy, had changed a lot in the years since I was last there. The highest number of migrant crossings in the Mediterranean Sea occurred in 2015 (UNHCR). 2015 was also when many humanitarian groups sped into action, creating search and rescue efforts to supplement Frontex and the Italian Navy. The Italian Navy’s rescue mission, “Mare Nostrum”, started in 2013, rescued an estimated 130,000 people, before ending the mission in 2014, according to the Washington Post. Today, while crossings are lower than before, the Mediterranean Sea is still a place of crisis, with migrants and asylum seekers left stranded on rescue boats for days on end. However, most of the crisis has relocated in North Africa.

The reality in Libya is a human rights disaster. Doctors without Borders investigators have found that migrants in detainment have been suffering malnutrition, physical abuse and torture. Critics have suggested that funding of detention centers in Libya has allowed the E.U. to outsource the migration crisis. Early last year, Reuters reported on efforts from the IOM to help migrants detained in Libya “voluntarily return” to their country of origin. This is part of a global trend to “upstream” or outsource migration efforts to supposedly “safe third countries”. However, these efforts lack a critical look at the reasons behind the migration flow towards Europe and even more importantly they lack consideration of migrant and asylum seeker’s basic human rights.

When faced with news of watery deaths in the sea or pictures of children suffering abuse while in detention, who do you blame? The factors which have led to these situations are complicated to say the least, involving the U.S., the E.U. as well as the governments from which migrants flee. Who is not to blame are the human beings themselves. They seek a better life, freedom, opportunities for education and safety. The reality for us all is that these basic human rights are being denied. We must find a way to provide a safe and manageable movement for migrants. This an ethical imperative we cannot ignore. This will require taking responsibility, recognizing our fellow human beings, the globalized world and speaking out against abuses of migrants, refugees and humans not matter where in the world they come from.
By Karen Larke