A Refugee Crisis or a Solidarity Crisis?


A Refugee Crisis or a Solidarity Crisis?

USF Arrives Going to Rome for the first time meant seeing an underlying theme captured in the following scenes: sitting next to nuns on the plane, seeing priests laughing while eating spaghetti, finding rosaries next to magnets at souvenir shops, and hearing a call for Sunday Mass at Terminal 3 in the airport. As graduate students from the Jesuit University of San Francisco we had the opportunity to dive deeper into the religious motif that permeates Rome specifically in the context of what these organizations (as well as non-religious organizations) are doing to support to the refugee crisis in the European Union.

Context & Service Delivery Seeing images again and again of a plethora of faces popping out of orange life-jackets in small boats against a huge blue sea gives a strong impression of helplessness and bravery for those risking their lives in making this journey. The UN estimated that in 2016 the total number of migrants that died attempting the journey across the Mediterranean exceeded 5,000 people. As a School of Management student, learning more about program management and refugee service delivery from Caritas Roma and Médecins sans Frontieres brought home how these organizations move from a desire to help to actual mobilized and monitored action. As the Jesuit organizations we met with reminded us, Jesuit values focus on both "Doing and Thinking" (not only thinking and not only doing, as Chiara from JRS stated). For example, Caritas Rome sees approximately 70 migrants per day, assisting in connecting individuals and family health, legal, professional, social and educational services.

Host Countries The organizations we met with in Rome said that migrant numbers have decreased annually since 2015 and that they are no longer in crisis mode, yet a ‘solidarity crisis’ still exists across Europe. Evidence of the solidarity crisis can be seen in the lack of host countries from wealthy G20 nations willing to welcome refugees. Recently, leaders in the T20 Task Force on Forced Migration are working toward providing financial support to low and middle-income countries who are supporting the bulk of the world’s refugees. 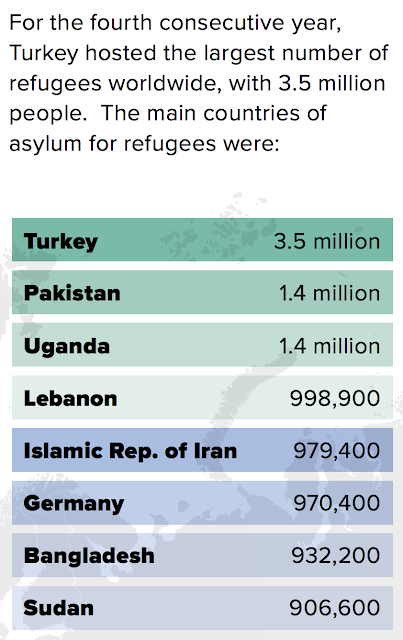 Top host countries per the UNHCR 2017 Global Trends Report on Forced Displacement
A Call to Action I left Rome inspired by the individuals and organizations that have mobilized toward helping some of the most vulnerable populations that exist today. It made me ask myself and want to ask others, how can we all start contributing toward 'outsiders' and other vulnerable populations in our communities today? I say let's take a page from the Jesuits and "Think and Act." This can mean getting involved with a local organization who supports refugees, migrants or other vulnerable populations, donating money for those who have less time, or voting for candidates who support these initiatives. It can also mean speaking in support of these groups as you encounter them in your everyday life or helping anyone with this experience integrate into your work or school environment.
When in doubt, we should all strive to operate under the Jesuit principle of thoughtful action.