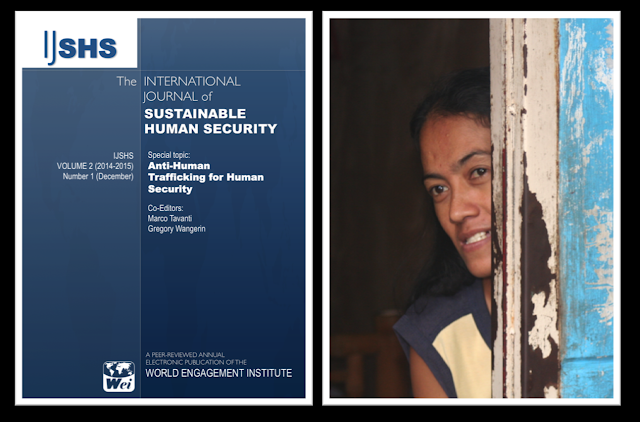 On December 2015, the International Journal of Sustainable Human Security (IJSHS), a peer-reviewed publication of the World Engagement Institute (WEI), published a special issue on Anti-Human Trafficking and Human Security. This special issue of the International Journal of Sustainable Human Security (IJSHS) aims to identify the connections between human trafficking and anti-human trafficking with sustainable and institutional solutions linked to the comprehensive framework of human security. Some of the AGI-Rome 2015 students submitted their paper that were accepted for the publication in the online issue. Under the editorial direction of Prof. Marco Tavanti, the special issue aims at considering practical and theoretical aspect of anti-human trafficking in relation to human security. During the past 20 years, human trafficking has been traditionally studied by various disciplines such as criminal law, human rights, international studies, gender justice and other social sciences. Yet, the complexity of the phenomenon requires a more comprehensive approach through multidisciplinary perspectives and multi-sector solutions. Human trafficking is more than a criminal activity. It is a practice often legitimized by a lack of awareness, socio-cultural norms, and lucrative-exploitative economic transactions. Anti-human trafficking solutions require systemic and structural factors linked to poverty, globalization, political and institutional capacity to protect victims and punish perpetrators. The sustainable human security comprehensive framework provides the necessary framework to study the structural causes of human trafficking while highlighting effective, innovative, and sustainable solutions to the fight against modern human slavery.

These are the titles and abstracts of the three AGI-Rome students:

"Partnership and the 3Ps of Human Trafficking: How Multi-Sector Collaboration Contributes to Effective Anti-Trafficking Measures." - Kelly Ann Yeo-Oxenham & Dylan Rose Schneider
This paper reviews the relevance of partnership in the anti-human trafficking globally adopted 3P strategy of prevention, protection and persecution. It proposes concrete recommendations for implementing cross-sector partnerships as a more effective response and holistic strategy to the challenges of modern day slavery. The fourth “P”, Partnership, was added to the widely practiced “3Ps” paradigm of human trafficking by former Secretary of State Hillary Rodham Clinton in 2009 in the attempt of promoting anti human trafficking solutions through pooled resources and collaborative strategies.

"Combating Human Trafficking Through Increased Awareness." - Zane Jacobs
This paper explores the role of awareness in anti-human trafficking. It argues that due to the lack of awareness, human trafficking has been allowed to flourish in many communities, operating in the shadows. Increasing awareness amongst victims and their surrounding communities will shed light on this atrocity and limit trafficker’s ability to function in secrecy. Awareness, in the case of trafficking victims, is the opposite of vulnerability. Awareness provides protection from traffickers by providing potential victims with the information necessary to recognize their options, and make informed decisions.

The IJSHS also included an article of Risa Harrison, a Master of Nonprofit Administration (MNA) who conducted a study on international adoption procedures and offered recommendations for avoiding human trafficking violations.

"An Examination of Trafficking Loopholes in International Adoption: Recommendations for Trafficking Avoidance." - Risa Harrison
The Hague Convention outlines an international agreement to ensure that intercountry adoptions happen in the best interest of the child. Much controversy exists around international adoption because some children have been trafficked into loving homes in a corrupt adoption process. While it is a child’s human right to be raised in a loving home, it is required that a child is not trafficked into such an environment. This paper looks at areas where loopholes can be found in the Hague convention such that a child can still be trafficked through a corrupt adoption even between Convention signing countries. It shows how international adoption and trafficking should differ, and will suggest ways adopting NGOs and Central Authorities can ensure that they are only facilitating adoptions for children in need of families, devoid of corruption, and can therefore avoid unknowingly trafficking children. This paper makes systemic and systematic recommendations to help ensure human rights and increase human security.