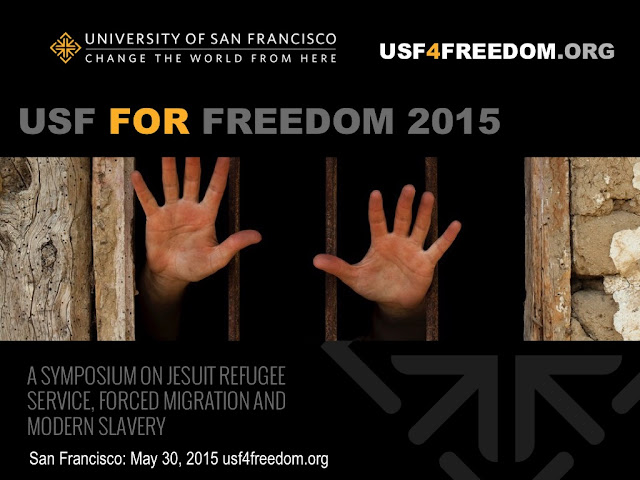 On May 30, the University of San Francisco’s USF for Freedom Symposium highlighted important issues surrounding human trafficking, including modern day slavery and forced migration.
“People think of slavery and human trafficking as a problem of the past, or at least far removed from the Western world. But it’s neither. Did you know that the Bay Area is in the top 13 locations in the U.S. for most child sex trafficking?” said Minouche Kandel, Women’s Policy Director at the San Francisco Department on the Status of Women and member of the SF Mayor’s Taskforce on Anti-Human Trafficking, during her keynote speech.
“There were at least 1300 Bay Area sex trafficking victims in 2012,” she said, “and we don’t even know the true extent of the problem because by definition this is a hidden problem.”
Dr. Marco Tavanti, Director of USF’s Master of Nonprofit Administration program and co-founder of the World Engagement Institute and his students organized the event.
Tavanti’s students’ learned about modern day slavery and forced migration from representatives of the Jesuit Refugee Service, a worldwide Jesuit organization that provides aid to refugees and other forcibly displaced persons during an Academic Global Immersion trip to Rome this past January.


After coming back from Italy, the students said, wouldn’t it be great to have a conference with Bay Area nonprofits and other organizations that promote the human dignity of victims of forced migration and slavery?,” Dr. Tavanti said. “They’ve been working on the symposium ever since, as yet another way to work with USF to change the world from here.

Keynote speaker Mitzi Schroeder, Director of Policy for the Jesuit Refugee Service, spoke about the Jesuit practice of accompanying refugees, listening to their needs and advocating for them. “A listening ear and an education is the only thing you can give a refugee that nobody can take away,” she said. “The average time a person spends as a refugee is 17 years. That’s a whole generation of refugee kids growing up in camps, outside of society, outside of their culture.”
According to the United Nations Refugee Agency, there are more than 51 million forcibly displaced people in the world today. By conservative UN estimates there are at least 21 million victims of human trafficking and slavery today.
“Why does our society produce so many victims?” asked USF President Fr. Paul Fitzgerald at the symposium. “How do we change our system so that it won’t?”
This is a question USF School of Management Professor David Batstone has been trying to answer for years. After accidentally finding out that there were victims of forced labor working at his favorite Indian restaurant in San Francisco, Dr. Batstone co-founded Not For Sale in 2006 and authored a book by the same name.
“This is a global, international crisis that reaches all the way to your local community,” Dr. Batstone said. “It’s evil, and I don’t use that word lightly. To take away someone’s freedom and dignity is evil.”
So what can be done to battle human trafficking?
Organizations like those present at the symposium are working hard to change the necessary local government policies. One example is underage prostitution victims, who shouldn’t be funneled into the delinquency system for prostitution’s illegality but rather need to be seen as victims and transferred over to Child Protective Services. “We’ve all heard the phrase child prostitute,” Kandel said. “But of course there’s no such thing. If a child is being prostituted, it’s slavery.”
Individuals can report suspicious activity to the National Human Trafficking Hotline (1-888-3737-888) or the San Francisco Police Department Tipline (415-643-6233).
People can educate themselves on modern slavery in the consumerism supply chain through websites such as Free2Work and Know the Chain.
“It’s important that we work from a mentality of empowerment rather than rescue,” said co-founder of Not For Sale and USF alumnus Mark Wexler. Not For Sale runs a program in the Bay Area called Reinvent that provides trafficking victims with education, counseling and jobs.
The USF For Freedom Symposium tackled such an important topic, that organizers are already thinking about next year.
“We will further connect USF with community organizations, nonprofits and social enterprises,” Dr. Tavanti said. “Modern day slavery is a complex phenomenon that requires coordinated effort to prevent, including protection of victims, prosecution of criminals, and establishing effective partnerships across sectors and agencies. As a university, we can play a crucial role in providing the space for awareness, sharing best practices and promoting social and global engagement.”
-------------
Want to know more about fighting human trafficking? Measure your slavery footprint. Donate your time or money to local anti-trafficking organizations. Sign up for the national Polaris Project and Stop Trafficking newsletters. Learn about the San Francisco Mayor’s Task Force on Anti-Human Trafficking. Check out our USF4Freedom website’s extensive learning resources.