Food Security and the Refugee Crisis 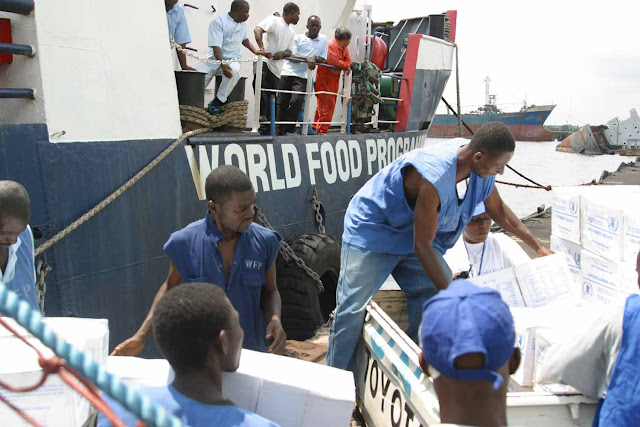 I would like to briefly address food security and the refugee crisis. Along the topic of collaborations with IGO’s, The United Nations World Food Programme, (UNWFP, or WFP) is a major Intergovernmental Organization, (IGO), which frequently partners with multiple organizations to address the food and nutrition needs of vulnerable people including refugees. To be clear the UNWFP is an IGO and not a nongovernmental organization. The NGO label came about as a way of distinguishing NGO’s from IGO’s( such as the United Nations) since a main distinction for NGO’s is that they are nongovernmental and also nonprofits.

WFP was selected due to my enduring interest in food delivery systems and nutrition assessment in connection with vulnerable people. WFP is the primary United Nations IGO dealing with food, thus, no surprise that they align themselves with the U.N. Zero Hunger Challenge (a.k.a.Strategic Goal #2). I would be remiss if I did not mention that with even the limited research that I was able to accomplish concerning WFP, the words of our recent esteemed speaker, Ms. Laura Cantarini, (UNHCR lecture dated 1/15/16, Hotel Atlantico, Rome, Italy), are with me now as I feel I have gained a more nuanced appreciation of the extremely complex issues and challenges, both at a grassroots level and at the higher policy levels, vis-à-vis ‘humanitarian aid work’ at the NGO or IGO international levels. I realize that my initial assumptions surrounding “food delivery systems for refugees” were naïve and unrealistic. We are not talking about planes dropping food, or trucks being driven exactly where they wish to go with no problems. Rather, it is a complex and intricate food assessment and delivery system with numerous and layered variables. Plus, to add to the challenge – on an international playing field - any variable may change and completely change impact or outcomes.
People on the Move: There will always be refugees as long as there is conflict, persecution of others, and great disparities in access to opportunities and wealth in this world. People will find ways to move to geographical areas where they discern there could be a better life for themselves and their families and, in the case of asylum where they feel safe. Who among us would not?  The more recent influx of refugees has placed incredible strains on the economies of host countries, and of course the infrastructures on food provision IGO’s such as UNWFP, is part of that stressed system, part of that equation. And yes, we can access UNWFP’s website and read about their food programs for it is necessary that we know these models. I propose that more may be learned from the failure of current models, especially when the current systems are stretched beyond their capacity as is currently happening, according to UNWFP and other sources such as FAO, 2015. Learn more:
Funding shortfalls: Reduced food provisions for the Syrian refugees are quite serious according to recent news stories and the service providers themselves.  Witness recent articles, (McLaughlin, Daniel, 2016), published in The Irish Times noting serious funding issues for WFP.:
“At the end of 2014 the World Food Program announced that a crippling funding shortage had forced it to halt provision of food vouchers to Syrian refugees in several Middle Eastern states. The United Nations organization warned that the move would “endanger the health and safety of these refugees and [potentially] cause further tensions, instability and insecurity in the neighboring host countries. So it proved, and cutbacks to the World Food Program and other aid organizations continued last year, depriving hundreds of thousands of refugees of assistance in poor host countries where they have few, if any, opportunities to find work.”
To learn more: http://www.irishtimes.com/news/world/europe/exodus
And here: http://www.wfp.org/stories/wfp-delivers-food-besieged-communities-madaya-fouaa-and-kefraya
And here: http://www.bignewsnetwork.com/news/240163367/aid-trucks-reach-starving-residents-of-madaya-in-syria

Funding Strategies: According to their website, the WFP relies on voluntary contributions to finance its humanitarian and development projects. Since WFP has no independent source of funds, all donations either in cash or in-kind must be accompanied by the cash needed to move, manage and monitor WFP food assistance. WFP's funding comes from Governments, Corporations, and Individuals and is on an entirely voluntary basis according to their website.  Governments are WFP’s principle source of funding and they note that they “receive no dues or portions of the UN assessed contributions.”  They assert that the WFP receives government support from “over 60 governments.” The WFP also discusses a ‘corporate-giving program’ but this program is not described in any serious detail at least not on their website.
Bigger Picture: Even if one is not an International Humanitarian Aid staff person we know and understand the importance of longer term strategies such as improving conditions in the country of residence whenever possible.  Yet we have also learned, as in the case of conflict (war), there are so many factors which are out of the hands of the service providers.  Remember these are service providers who are (supposedly) adhering to ethical codes of neutrality and impartiality not only for their own protections, but to gain access to those needing the services and to protect their lives. In this context, we see the ‘reacting to emergencies’ assistance paradigm played out over and over. The recent vulnerability of providing food (and other resources) to refugees has been described as a donor weakness by UNWFP (certain Country donors did not come through), however, this response appears superficial and actually leaves, in my view, numerous unanswered questions. Indeed, if I were the donor representative for a Country I might as for more details as would other stakeholders (partners?). In my view, the UNWFP should implement an evaluation of what happened vis-à-vis the recent food shortages and be as transparent as possible to all stakeholders, and further, provide future strategies to address funding shortfalls which negatively impact food delivery systems.
In referencing IGO’s and food delivery systems related to refugees in particular, we need to be mindful that refugees are restricted in their physical movements for a variety of reasons such as their documentation and Country of Origin status. This week we learned that, in the majority of cases, refugees have fled their Country of origin with minimal documentation or material items, thus, upon arrival to a host Country, they have very few resources. Obviously refugees are vulnerable to those wishing to exploit their desperate circumstances. The take away here is that food delivery systems can never reach 100% (too many variables) but it can and should be improved. I do agree with the Jesuit Refugee Services’ recommendation of calling for other funding sources and models to be explored to ameliorate the numerous vulnerabilities in the food chain systems, or the direct quote from JRS:
“Reforms should be sought in the present system of funding food needs, so that the ongoing needs of refugees and other vulnerable populations are not neglected due to competing demands from new food emergencies.”
In closing, merely studying food security challenges surrounding refugees and UNWFP has opened my eyes not only to the many complexities surrounding this topic, but to the myriad of things that I take for granted in my life such as clean water, nutritious food, and a home where I feel safe and secure.  My assumptions about my life were further emphasized when listening to the story of “Jerry” (not his real name) the refugee who spoke to us about how he became a refugee and eventually obtained asylum in Italy.  But “Jerry” is separated from his family and still feels that he cannot return to his Country safely. As I am reminded about my privilege in this global world, I know that as I continue my studies concerning NGO’s, IGO’s and other entities in the nonprofit sector I will build upon all that I have learned in the AGI-Rome program whether addressing food security issues or other challenges.
By Unknown