UNEDUCATED COMMENTARY OF U.S. CITIZENS IS HARMING THE CHILDREN OF SYRIA 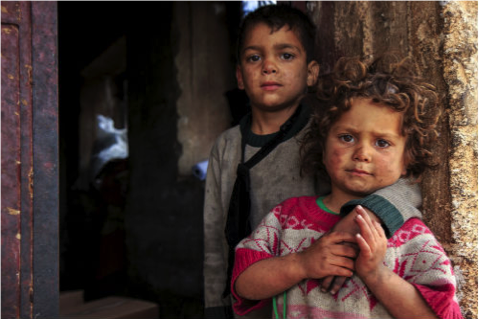 While searching for articles related to my case study, I came across a “Hardball with Chris Matthews” video of Mark Shriver (JFK’s nephew), President of Saving the Children –Action Network. This short interview was focused strictly on children of Syria and the need for (U.S.) Americans help. When I read the public commentary in response to this video I was appalled (see examples of commentary below). I understand that most comments posted on the web tend to be from a small population and mostly negative viewpoints however these responses help frame a picture of the lack of comprehension, at least in the U.S., of what is happening in Syria. One may think who cares about a few comments - they are not significant. However we should consider that during elections the general public and social media commentary does have some power. Candidates are listening to public opinion, taking a stance on it and then feeding it back to the general public. The end of this cycle often becomes accepted general opinion. These comments do have serious indications.

A short time after this video was released ABC news reported on "Thousands in Syrian Town of Madaya at Risk of Starvation " and Quartz.com showed horrific photographs of people starving, including infants, children and pregnant mothers. The town of Madaya had not received any food for four months because they were under siege by ISIS as "a punishment for another cities doing." No one could enter; no one could leave. Madaya once a resort town for the wealthy had now become a prison for its own people.

Viewpoints from our politicians, social media and this commentary have included that the Syrian Civil War is brought on by themselves, they have a choice, they should stay and defend their country, it is not our problem and other various ignorant responses. The babies in Madaya that get milk once in 10 days did not bring this on, have absolutely no choice, cannot depend on themselves (or their families) and truly need our help! I beg Americans to become more educated on the situation and if they find they still do not want the U.S. to help at least portray the real story.

EXAMPLES OF COMMENTARY ON MARK SHRIVER EXPRESSING THE NEED TO HELP SYRIAN CHILDREN:

"Absolutely not! First of all can you imagine what a country this might be it during our Civil War everyone flood. These people won't stand up for their own country they absolutely won't for ours. Parentheses we parentheses should just leave it to work itself out.

"I would never be a refugee before defending my home and Space expect some other country to take me in. There is a difference between someone that spends the time trying to come to come to be an American and someone coming because they don't have the gall to defend their home.