Religion, Community, and Accompaniment in a Secular World 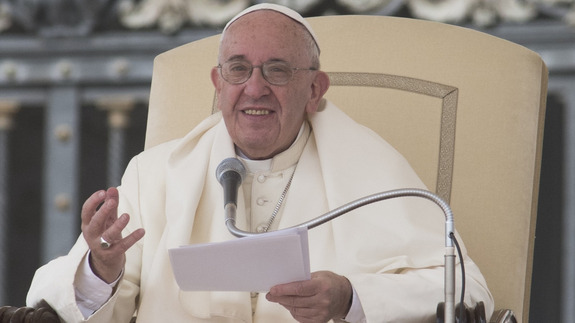 I knew before coming to Rome for this AGI that I was going to have many opportunities for experiential learning—that is, learning more about a subject by direct contact and involvement.  I had thought that I would do so only within the set structure of the class itself, the people we were going to hear lectures from, the places we visited together, that sort of thing.  But my experiential learning this past week in Rome went so far beyond the class components that I am still processing what it all means.  What I DO know is that my preexisting assumptions about religion, humanity, and the definitions of “charity” and “community” have all been spent spinning, in the best of all possible ways.

First, a little context: I am a true daughter of the American Immigrant experience.  My mother’s family is Irish/Scotch Catholic, while my father’s family are Ashkenazi Jews.  I was raised in the Reform Jewish community in Southern California but went to public schools and spent a lot of time (including Christmas) with my mom’s family.  I identify as Jewish, but I am not religious and only attend services on the most important (and/or mandatory) holidays.  I have, unfortunately but inevitably, come across my fair share of Antisemitism, but that is part and parcel of being a Jew.  Growing up with family on either side of the religious aisle—so to speak—and having friends of nearly every other Christian denomination, as well as a few World Religions classes under my belt, I have always believed that Religion with a capital R provided a moral framework, incentive to behave decently towards others, but otherwise to be shelved under the category of “opiate of the masses.”

What I witnessed—and experienced—in Rome this past week has shown me how wrong I was to dismiss Religion so easily.  Yes, I am earning my masters at a Jesuit University, although I didn’t exactly know what a Jesuit was until after classes started.  I didn’t fully appreciate the Jesuit emphasis on education, advocacy, and accompaniment beyond that it was unbelievably similar (except for the whole 'Jesus Christ' thing) to the Jewish principles I was raised to appreciate and uphold.  On our first morning in Rome, Father Ken Gavin from Jesuit Refugee Services introduced the concept of accompaniment, the idea that people in need require—and deserve—the comfort of companionship along their journey towards a new, hopefully brighter future.  This theme came up over and over again, but I was especially struck that first day by this idea that charity on its own isn’t enough, but that to really serve the needy you must also actually get to know—and respect, listen to, and befriend—him or her on a very personal and individual level.  As Father Ken would say, otherwise you are serving their human needs but not their humanity, which in many cases is just as crucial (if not more) as food, water, and medical care.  Later in the week we heard directly from a young man who had been saved—physically and emotionally—by the intervention and care of Centro Astalli, one of the Jesuit refugee organizations in Rome, and credited his current success almost entirely to their involvement in accompanying him on the extraordinarily difficult journey to resettlement in a completely foreign country.

This concept of accompaniment was reinforced when our class went to see and listen to Pope Francis himself, the first Jesuit pope in history.  Although I wasn’t entirely able to translate everything he said, his message of compassion and welcome to the whole world, and not just its practicing Catholics, was evident both in his sermon and reflected in the faces of every person in the audience.  I saw how a group of my fellow Catholic classmates were utterly transported by the experience of meeting and being blessed by this wonderful man, and understood how much his unique ability to bring people together has benefited humanity and will hopefully continue to ameliorate previous tensions in this new, utterly international millennium.  I was extremely moved and impressed by his humble nature and clear love of humanity, as well as his message regarding the acceptance and indeed accompaniment of the migrants who are being forced from their homes and mostly left to fend for themselves in a strange new country.  I was by no means the only person with tears on their cheeks as he blessed the audience and called for their compassion.

As if these experiences weren’t enough to show me first-hand the positive power of Religion far above and beyond its “mass opiate” appeal, I accidentally ran into my own private personal example of the importance of community and, yes, accompaniment, in the days I spent alone in Rome before our program even started.  After wandering through Trastavere and the western areas of Rome one afternoon, I looked up with surprise to discover that I had somehow strayed into what was clearly the old Jewish Ghetto.  I’m not sure why they call it that, because as I rounded a corner I suddenly found myself in what I would call the new Jewish Ghetto, in that ghetto technically means neighborhood and that it was the street where all the Kosher shops and restaurants are.  It was a Friday evening, the start of the Jewish Sabbath.  I visited a Kosher gelateria (highly recommended, in fact the best gelato I have ever had anywhere), and was shocked into immobility when the woman behind the counter shouted out a friendly “Shabbat Shalom!” as I turned to leave.  I looked back at her as it dawned on me that it was, indeed, Shabbat, and that the traditional Hebrew greeting was the same in Rome as it was in Santa Barbara or San Francisco or Jerusalem, for that matter.  She must have seen my bemused surprise, because she smiled broadly and beckoned me into the back room.  There, on a small table, sat two candlesticks, a bottle of wine, and a loaf of (clearly home-made) bread: the three things necessary for the traditional Jewish Shabbat blessings.  Together we lit the candles, drank some wine, ate some bread, and chanted the same words that have been spoken by my people for over 3500 years to thank God for getting through another week.  I may be a mostly secular person, but I felt a power and history behind those simple words that spanned not only thousands of years and hundreds of generations, but also the distance between California and Rome, and between English and Italian.  I would never have given the Jewish Ghetto more than a check mark for amazing gelato had she not reached out to guide and, indeed, accompany me in the traditions of our shared heritage.  For that half hour, we were sisters as well as companions, and I indeed felt truly welcome.