Human Trafficking In Our Own Backyard


As I prepared for my trip to Rome to study the refugee crisis and international anti-human trafficking efforts, I was surprised by some individual’s reaction. Some people I spoke with felt this was an issue that did not affect them and was not relevant to our community. As the Super Bowl approaches, local elected officials and organizations have been increasing their efforts to raise awareness that human trafficking is an issue that has an impact on our neighborhoods. US House Representative Mike Honda wrote a special article to the San Jose Mercury News on December 28, 2015 that, “with increased tourism, we predict a spike in human trafficking. With this concern, and with an eye to hosting a celebratory event, federal, state, and local officials are partnering with law enforcement and community leaders to raise awareness and prevent the tragedy of human trafficking.” (San Jose Mercury News) Airport staffs at the San Jose and San Francisco international airports have received training on how to identify potential human trafficking victims and respond quickly to save the victim. 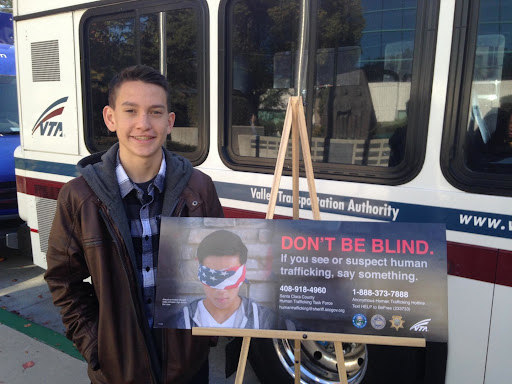 Image Credit: Not For Sale

In November 2015, three human trafficking suspects were arrested in Santa Clara County by the Office of the Sheriff and six victims from Spain were rescued. The problem of trafficking precedes the Super Bowl and will continue to plague our community. According to Not for Sale, “Slavery isn’t dead. Human Trafficking enslaves more than 30 million women, children, and men every year… [And] 43% of California’s trafficking occurs in the San Francisco Bay Area.” Not for Sale is a 501-c-3 that was created after its co-founder, David Batstone realized in 2001 that, “his favorite Bay Area restaurant had been the center of a local human trafficking ring that forcefully brought hundreds of teenagers from India into the United States.” (video below) I urge you to visit their website, learn more about the projects they have in place around the world to combat human trafficking. Please also visit the sites of local agencies and resources below to learn how you can get involved here in our own community. Human trafficking affects the safety and quality of life for our entire community. I hope we can all use the notoriety of the Super Bowl as a call to action to get engaged and to eliminate modern day slavery in our own backyard.